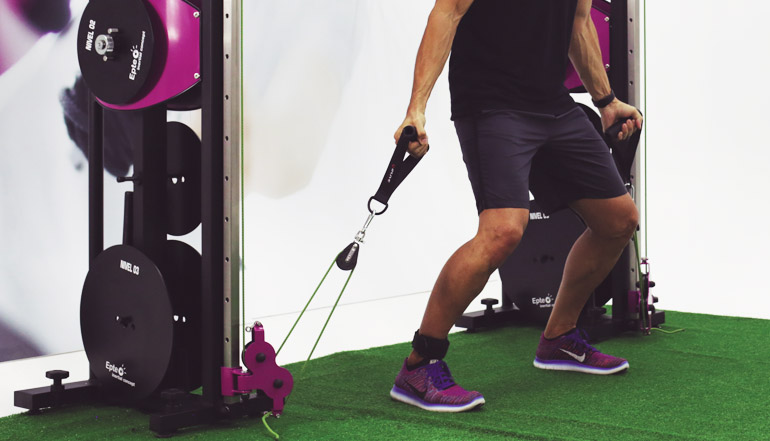 Functional training with eccentric overload is usually related to the prevention and rehabilitation of sports injuries but also implies improvements in the level of hypertrophy and strength gains. In this post we will tell you about the benefits of inertial training for sport performance by the doctor Fernando Martín Rivera.

Functional training with eccentric overload is successfully applied for prevention, rehabilitation and readjustment of injuries. But, it also has numerous benefits in sports performance that go beyond the improvements that are archieved with traditional strength training.

According to the professor and doctor Fernando Martín Rivera, recent studies such as those carried out by Oliver González-Skok et al (2016) and Martín, F. et al (2016) have shown that the performance of functional training with eccentric overload shows evident improvements in strength vectors applied mainly in sports that require direction changes, series of jumps and landings, accelerations and decelerations. These actions are more commun in collective sports like football, basketball or rugby. You can see the tutorials and videos with the sports movements that we are talking about here: Videos EPTE® Inertial Concept.

In this sense, it was verified that the improvements in directional level are much better when is applied an eccentric functional training with the application of force exercises with vertical components, which is the case of the comparation of eccentric exercises and tradicional squat exercises. It is true that the squat must also be applied because the gains at the vertical line lever are greater than only with eccentric training.

These peculiarities of eccentric contraction were known through studies and research on eccentric overload training but carried out from the execution of traditional bodybuilding exercises. Recently, its application to functional training is leading researchers to realize its advantages over regular strength training.

To train with eccentric overload it’s much better to have an inertial device that allows you to perform not only tradicional bodybuilding exercises but also provides sufficient versatility for this type of actions in which the effort is determined by the user, explain Fernando Martín.

The versatility provided by EPTE® Inertial Concept, makes it the device for isoinercial exercise that is revolutionizing the field of eccentric training. In fact, the health and sports professionals who use it in their centers, affirm the good results obtained in both rehabilitation and sports performance.

Inertial exercise and its 10 most important benefits